People who’ve already come across that mysterious creature known as Beetlejuice are well aware of the dangers of saying his name three times – legend says, on the third utterance, the creature will magically appear, having been summoned by the power of your very words! Beetlejuice is an iconic Halloween legend born from an eighties film featuring the legendary figure. Before we go further, let’s dig a little deeper into who Beetlejuice is and why he’d make a great Halloween costume! Enjoy these fabulous Beetlejuice wigs!

Beetlejuice is a trickster and mischievous ghost who is about 600 years old. He frequently appears as a man in his thirties who’s committed to rude, crude, and perverse entertainment. He loves pulling pranks and tricks on people and has been known to manipulate his own appearance in order to scare people. Beetlejuice waits in the waiting room of the afterlife for people to call him by accident or on purpose, and once released he helps recently deceased ghosts wreak havoc on the living world. Plenty of people have fallen in love with this tricker character and begun dressing like him on all sorts of occasions. Though he does naturally fit with men between ages 20 and 40, all kinds of people can successfully dress as the master of the netherworld, Beetlejuice.

Now that you’ve got more of an idea of this legendary Halloween figure, how should you go about dressing as him? There are a few different avenues to take.

The essential part of Beetlejuice’s look is his signature crazy hair. Depictions of him have ranged from neon green to a dark and faded grayish white, but no matter which you choose to pursue, having a good wig will be top on your list of priorities. Here are just a few of the spectacular options available to you.

Another white take on the famed Beetlejuice look, this wig is slightly chunkier and more matted, emphasizing the decomposing element of this crazed character. It’s a little bit harder to comb through, but storage will be easy since this matted masterpiece just needs to be sealed in a bag before storing in perfect condition for the next costume party. 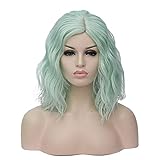 A faded green look closer to the Beetlejuice character presented in the musical, this mint green wig somehow creates feelings of mold, must, and decay while still being fresh and wacky like the character itself. 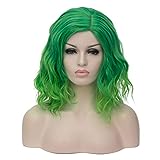 This look truly dives into the neon green wildness of a true Beetlejuice look. Bright, styled, and easily washed and stored, this wig is a phenomenal investment for any character aficionado, but especially those who crave the Beetlejuice experience. 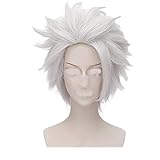 Though derived from an anime character originally, this spiky look is a perfect accessory to a more modern take on Beetlejuice. This wig maintains its spikes perfectly despite repeated use and can easily be washed and reused for any number of costumes, but especially Beetlejuice.

This wig brings Beetlejuice to children. Available in smaller sizes for children or even people with small heads, this iconic Beetlejuice look is perfect for any size person wanting to take the Beetlejuice look to the next level.

This crazy afro brings Beetlejuice to life in even wilder ways. Backcombed to the sky and fully teased, this wig encapsulates the wild Beetlejuice experience and is perfect for any woman looking to create a crazy Halloween look.

If you liked this article on Beetlejuice wigs, you may be interested in learning more about how you yourself can successfully implement wigs in your costume ideas! Check out our wig accessory guide for more helpful tools on getting started with wigs and our similar article on Ron Weasley wigs for fun character suggestions. 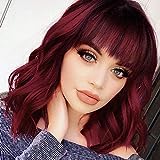 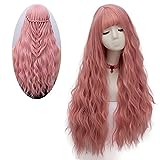